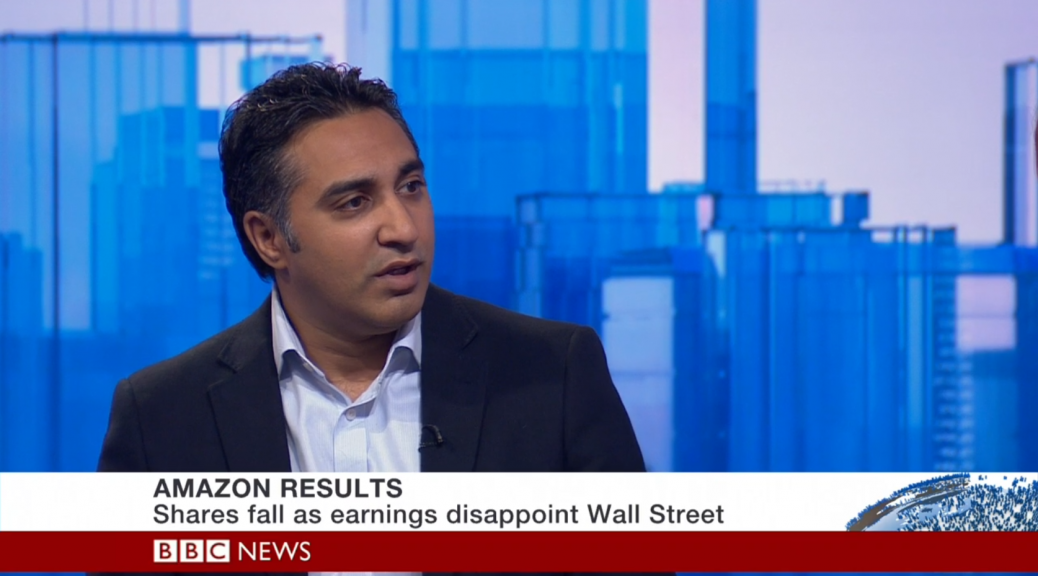 The big four (Facebook, Google, Amazon and Apple) as the media refer to them, or big five as Microsoft should really be included have all released their numbers in the last week or so bar Apple, who release this week.

I spoke briefly on the BBC (video below) on the Amazon results but with so much happening at Amazon I’ve expanded on it further.
No one expected the disappointment in the results (which showed Amazon beat revenues but miss earnings).

In the lead up to Amazon’s results, the analysts were super positive. But like Google, Amazon has never really respected the stock market’s quarterly results cycle and this quarter’s results was a reminder of this. The investment over the quarter meant that earnings were 0.40c per share, instead of an average $1.41 per share. They didn’t just miss expectations, they completely ignored them. Why were we surprised?

The money is being invested predominantly in three major areas – expansion into Asia, delivery and their video service in advance of the key Christmas period. This was Amazon for the most part making a bet on their next quarter’s numbers and beyond.

In the US, maintaining Amazon Prime membership is now a critical way of shutting out the competition. More than 50% of US households are a member and Amazon’s competitors do not have their heads in the sand and are trying to compete.. slowly. Amazon though is not stopping at next day or even some same day delivery. It is pushing for broader and faster capabilities.

In the same way as Google changed the game with Gmail’s vast amount of storage, Amazon has done the same with Prime. Even more impressively they have done so for a fee. Amazon clearly believes that delivery speed will continue to be a key differentiator. Their recent Prime Day sale, exclusive to members was their biggest to date.

Behind the scenes
The margins at Amazon are thin but when you look underneath the covers, Amazon Web Services, their cloud server platform used by companies globally to host apps, websites etc. are performing extremely well and are increasingly profitable. It is a $10bn business and grew a healthy 42%. They completely disrupted the provision of servers to businesses and are continuing to lead the market. Microsoft’s presence here is starting to be felt now – they previously grew over 50% and whilst they are still far and away the leader, Microsoft has the arsenal to go toe to toe with Amazon.

The most exciting opportunity amongst Amazon’s portfolio is the Alexa ecosystem. This is not an area that Amazon has typically succeeded in. Their previous foray into hardware was their Fire phone which flopped. Alexa though is the clear leader in the smart virtual assistant space right now.

This gives it a unique opportunity to change the way we interact with technology in a similar way to how Microsoft did the same with the launch of Windows 3 and the adoption of the mouse. Back then, Microsoft used the success of Windows to build multi-billion dollar businesses in office and server software. Alexa could allow Amazon to do the same.

Amazon is placing communication as its bet on the key feature alongside the assistant itself. It launched the Echo Show in the US recently which disrupts the videophone.

The rumour is they are also going to launch a messaging platform to compete with Facebook and WhatsApp. This will work on the desktop and phone but if it isn’t tied directly into Alexa it will be a missed opportunity in my view. Even then, I am not convinced we need yet another messaging platform. Google has tried to compete in this space for years with little success. Whilst Excel truly transformed the way you used a spreadsheet vs Lotus 1-2-3, I am not seeing anything different about Amazon’s messenger vs Facebook’s.

Maybe Facebook will misstep when they monetise their messaging platform later this year. I wouldn’t bet on it.

What interests me the most is how, despite the very differing cores of each company, we are seeing the big five attack the same opportunity from their home turf.

In the short term, the bet is on smart virtual assistants. All of the five except Facebook has one.

Amazon being the most open (and Microsoft-like in strategy) by opening up the platform and building strong partnerships to extend the ecosystem. Their approach tightly integrates with its ecommerce engine of course. As previously mentioned, social is the piece it also wants to own itself.

Apple is focusing on music, which given the strength of iTunes should be of no surprise, though I suspect it will overhaul Siri every year until it is a really strong competitor again albeit within its closed Apple ecosystem. One for the fanboys 😉

Google is focused on its assistant being the best at providing information, building on its historic search capabilities. This should mean that it has the most helpful assistant over time but can it provide the breadth of services that the others are building?

Finally there is Microsoft, which under Nadella has the clearest vision it has had for a long time. They are focused on productivity. This potentially makes it a strong player in the business space but the consumer space is where the growth is today. Can it succeed here? I’m sure it will find a dozen or so hardware partners and flood the market but it needs to deliver on partnerships like Amazon has done to succeed. It could equally succeed as a business though without the hardware piece and just deliver its productivity capabilities through the other platforms.

What about Facebook? Well I am sure there will be addons across all the platforms for Facebook and WhatsApp. That is one reason I don’t believe Amazon’s messaging platform can succeed without more significant capabilities.

The smart assistant devices are also just a version one technology. They’ll integrate into everything and be everywhere. In your car, phone, TV and laptop. Probably even your fridge. To truly work though, they need to not just wait for our question but need to understand what is happening around us. The research Facebook is doing into augmented and virtual reality will deliver the next leap in smart assistant technology. The market may have passed Facebook by then though.