Following on from my previous post on how communicating and reaching your audience is changing and providing more power to the individual, this video only served to reinforce the message.

The video is of Clay Shirky talking about the history of media and how it is changing how not just the media publishers but companies as well interact with people. There are some great slides and anecdotes that I am sure I am going to reuse a multitude of times going forward.

I have been watching Google Wave with no small amount of excitement.. if you haven’t seen or heard about it yet, I recommend you go here and watch at least the first 20 minutes of the video or here if you just want text.

What is most interesting to me is how it moves the needle forward in the email space online. The SMTP protocol was first defined in 1982, and has not changed drastically since. Google Wave is a re-envisioning of how communication on the web could be and it certainly looks like a productivity booster.

But why are Google doing it?

I dont see it adding revenue through advertising.

Are they able to track and understand user behaviour more with this protocol over email? Maybe, but even if this were the case, 3rd party providers could remove or disable this as the product is open source.

So that can’t be it.

There is potential for Google in both the consumer and business space.

On the consumer side, it is an improvement on current separate communication mechanisms along with a definite social element which could challenge Facebook or Microsoft  – though if it really became a threat, Facebook (or Microsoft) could roll this technology out themselves (and finally improve Facebook’s own messaging platform). I wonder if Wave technology will add to the Opensocial platform and become the glue that brings different social networks together. With Google Wave, it could be possible to see the same photo albums in Facebook and Myspace using Wace as an underlying technology. I wonder how this would tie into Facebook’s idea of relationships and privacy.

It is in the business space that I think Google has even more potential with the product. Google Docs has not done great, and in general Google has not been a huge success in the business arena which is still Microsoft’s stronghold. Google Wave for me seems to show significant productivity increases for groups of people both locally inside one office and across multiple offices. That alone could see it adopted by companies. Once it is inside the company, the ability to edit documents inside the wave client (similar to how they currently do it with Google Docs and Gmail) would mean people could start to use web applications more and more.. and start to use Microsoft applications less and less.

Of course, Google Wave might take a significant time to be used globally like email it today. My guess is it might need to integrate with email (SMTP) in the short term. But how long before Wave is a protocol in Exchange server? Exchange server is obviously moving towards being a web service itself, and Microsoft Office has launched lightweight web versions of Office (call Office Live Workspace) . Could we see a Microsoft Exchange/Office integration using Wave protocols. It would be great if the 2 companies worked together on improving the protocol.

Why else is Google doing Google Wave?

It is an obvious thing to say: we place differing levels of protection on the various ways of allowing communication. Over recent weeks I have been watching how people protected their various ways of being contacted.

Borders has been looking to build out its ability to communicate with its customerbase via email. They ask you at the point of purchase for your email address and in exchange they will give you 20% off their next purchase. It has been hugely successful from what I could see just in the shop alone. People were more than willing to hand over their email address – it took 30 seconds tops and Borders had a way to start a conversation with their customers. (Unfortunately they screwed up the start of the conversation by sending me an email which said this voucher doesnt last very long and only applied to certain things – I deleted the email – but that is a post for another time).

Now imagine if they had asked for my address instead? I am not so sure I’d willingly give it out – I would certainly pause before doing so.

What about a telephone number? No way..

How about SMS? Today not a chance. I wonder if this might change in the future..

Overall though, getting a user’s email address strikes me as being the lowest barrier to starting a conversation with a customer.

Another example over at Kiruba. Here they have taken a screenshot of a business card and blurred out just the telephone number, leaving the address visible. Obviously protecting the phone number is much more important. (The business card is actually a wedding invite (!) but you can read more about that here). 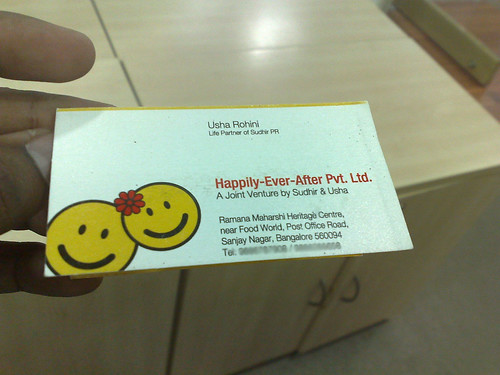